I am an Associate Professor in Women’s & Gender Studies at Athabasca University.

My research examines the relationships between LGBTQ2S social movements seeking social justice, and the state. My current SSHRC-funded research project offers insights into the current state of LGBTQ2S political organizing in Canada in relation to various police organizations. My research engages with the tireless, passionate, exciting, dangerous and transformative work of LGBTQ2S activists in Canada who carve out queer publics; who put their bodies on the line to demand police accountability; and who raise their voices to call-out exclusions in their own communities, and to protect and lift up those who are marginalized.

I have published and forthcoming works on LGBTQ2S politics, specifically on the following topics: same-sex marriage activism in California; the history of LGBTQ2S politics in Alberta; LGBTQ2S refugees in the Canadian refugee system; homonationalism and the Canadian criminal justice system; the uses of anger as a tool in LGBTQ2S activism; and the politics of police in LGBTQ2S communities.

My research and teaching are informed by my work as a white settler queer activist in Edmonton (amiskwacîwâskahikan, Treaty 6) where I have contributed to various social justice projects as a community organizer and agitator, public educator, union member, columnist, queer arts festival co-chair, and radio producer and host.

DeGagne, Alexa. 2018. “On Anger and Its Uses for Activism.” In Contemporary Inequalities and Social Justice in Canada. Janine Brodie, Ed. University of Toronto Press.

Trevenen, Kathryn and Alexa DeGagne. 2015. “Homonationalism at the Border and in the Streets: Organizing against Exclusion and Incorporation.” In Disrupting Queer Inclusion: Canadian Homonationalisms and the Politics of Belonging. OmiSoore H. Dryden and Suzanne Lenon, Eds. UBC Press.

DeGagne, Alexa. 2012. “Queering the language of ‘sexual minorities’ in Canada.” In Beyond the Queer Alphabet: Conversations in Gender, Sexuality and Intersectionality. M.S. Smith and F. Jaffer, Eds. Ottawa: Canadian Federation for the Humanities and Social Sciences. 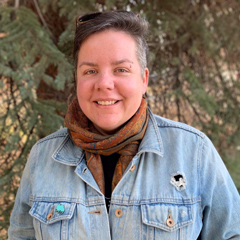 Updated May 26 2021 by Student & Academic Services